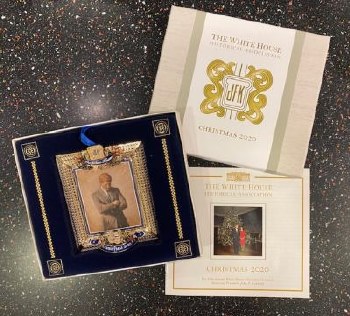 40th Annual White House Christmas Ornament honoring President John F. Kennedy. Featuring his posthumous official White House portrait, the artist chose to paint him with his head bowed, to show him as "a president who was a thinker". The artist hoped to"show a courage that made him humble". The reverse of the ornament features First Lady Jacqueline Kennedy's quote, "The White House belongs to the American people".